ISM –IDEAL SADDLE MODIFICATION. Their saddles are used by many triathletes. I havent seen too many mounted to road bikes so I thought this might be something to explore.  ISM reports that Dr. Sommer commented that with the ISM saddle, blood flow in the perineum area remained at 100% throughout his tests.

Dr. Sommer stated, “ISM – A saddle where there is hardly any blood loss. Which is excellent to preserve sexuality and for preventing erectile dysfunction.” 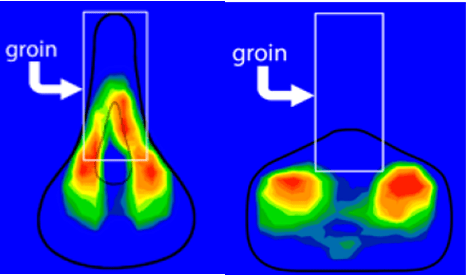 In a recent April 2009 Study, NIOSH concluded that the best bicycle saddle is one with no-nose. The 2 attached graphics summarize this article which shows the pressure points of a tradtional saddle (left) vs. a noseless saddle, which turns out to pretty much match ISM ADAMO racing saddle pressure points (that include a ‘nose’ -see figure below). These great results are due to ISM placing the riders groin in front of the saddle arms.

For 2013, ISM has 11 ‘racing’ style saddles (they will be adding the ATTACK) and 2 sport/touring saddles which offer a wider seating platform and a shorter nose. Talking with ISM, the name of the saddle has very little to do with the function. The current overall best seller is the Adamo ROAD (ADAMO = Performance, ROAD = Road).

ISM states that this  saddle crosses multiple boundaries of Road, Off-road and Tri. For the ‘roadies’, the best sellers are the PODIUM, BREAKAWAY and PROLOGUE. These are all built from the same mold, but with different amounts of padding. To be released shortly will be the ATTACK, a specifically built saddle for the road. This new saddle offers a deeper and longer channel behind the cutout. This saddle is also a little slimmer. I think the ISM ATTACK will be accepted by ‘roadies’ and be seen on more and more road bikes.

You can find your saddle by using the saddle selector, which walks you through picking the right saddle for your riding style. I chose the Podium which is 270mm long by 130mm wide.

HOW TO SET UP THE ISM SADDLE

Placing the saddle on the bike, I used my original bike measurements to get close to a comfortable fit. Here is what I have learned in order to easily setup the ISM saddle.

HOW DOES IT RIDE?

Out on the road, I got some strange looks, and quite a few questions. “What saddle is that?” “Is it comfortable?” and the knucklehead that said “You got the wrong bike for that saddle”. And that’s where I think ISM is fighting an uphill battle with the roadies. Roadies expect a saddle to look a certain way and this saddle doesn’t. But again, does it work? That is what I was interested in finding out.

During my first ride, I stopped half a dozen times tweaking the setup. These tweaks resulted in the tip being tilted down a little more, the saddle raised about 2mm, and slid back 9mm from initial setup. After that, it felt right. It felt comfortable, very comfortable. It took quite a few stops to get it adjusted, but in the end, no pressure points, no soreness, no numbness … this is how its supposed to be.

For the roadie market, the only drawback is that it does not ‘look like’ a typical road saddle. This is where I believe will be some resistance from a ‘true-roadie-racer-type’ to try a saddle that is outside of the (roadies) box.  This is not a negative thing, but an opportunity that ISM is addressing with a brand new, to be released model called the ATTACK which looks a little more like  a road saddle. It’s a little narrower here, a little flatter there, longer and deeper groove that is more in line what a ‘roadie’ expects a saddle to look like. It still has the basic saddle arms extending out the front and I believe it will be accepted by more roadies than current line models.

WHERE I FELT PRESSURE AND WHERE I DIDN’T

Sitting in an upright position (as with someone with little pelvic flexibility) this ISM saddle was the most comfortable for me out of all of the saddles I tested. In mid position, I could feel the difference in the widths between a traditional saddle and the ISM.

A few more tweaks and off on a 60 miler and I actually started getting used to the different shape and contact points and the saddle started feeling a lot more comfortable. At the end of the 60 miles, there was no soreness anywhere and I felt fairly fresh- as fresh as you can pushing 20mph average. As with any saddle, the worst thing you can have is a saddle that is not adjusted correctly since  you will be fighting this the whole ride. You will feel more beatup and exhausted than if you rode a correctly adjusted saddle. The added benefit of the Podium is that it also has just the right amount of foam/gel to make even a century ride comfortable.

This saddle can be ridden comfortably on the top of the bars, hoods, drops and especially horns. When the saddle is adjusted correctly, your genitals are almost positioned in front of the saddle arms, this is especially true for the shorteer ISM saddles such as the ROAD. In this position, I felt the least amount of frontal pressure out of all of the saddles tested. It is just with any other sitting position, you really need more time in the saddle to get used to this saddles design, especially if  you have a narrow Q-factor and larger diameter legs.

The bottom line is that Yes, this is definitely one saddle worth considering for your road bike. 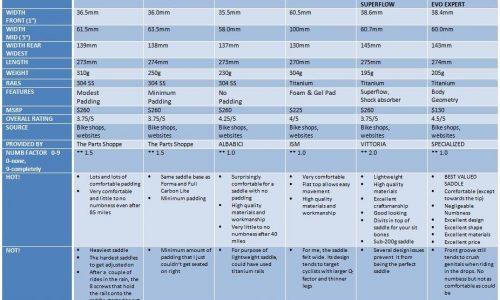 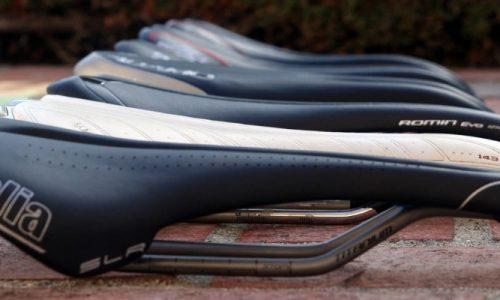 Saddles Part 6 – So Who Won the Best Bike Saddle Title?