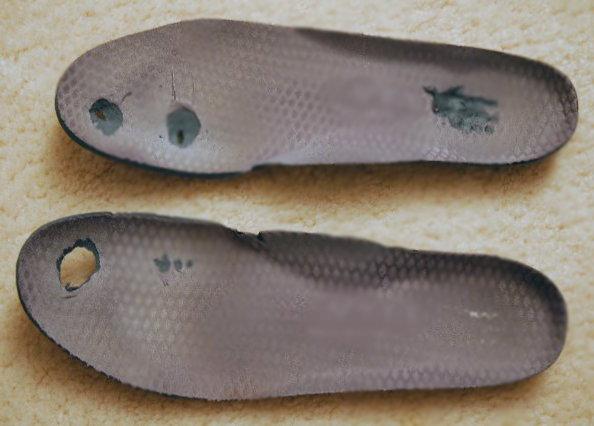 A while ago, I did several tests and authored several articles on insoles, including Shimano’s new insole for their SH-R320 and follow on SH-R321, as well as an indepth test and writeup on G8 Performance’s 2600 PRO and IGNITE insoles. All three of these insoles have held up pretty well but are now starting to show major signs of wearing out.

As a professional bike fitter and USAC Level 2 cycling coach, I see clients almost every day. Two things that most have in common are (a) worn out cleats and (b) worn out insoles. I have decided that it is in my clients best interest that I carry both of these items so we don’t have to stop the bike fit while they run all over town to find some cleats and insoles.

This post might contain affiliate links for which we may make a small commission at no extra cost to you should you make a purchase. Learn more.
The cleats are easy. 90% of my clients have Shimano pedals, 5% Look and 5% Speedplay. Insoles on the other hand have proven to be significantly more complicated to evaluate. The reasons are many and are discussed below.

Several years ago, I went to get fit for a fully customized pair of insoles at a local Podiatrist but quickly found out that Podiatrists don’t know anything about making insoles for low volume cycling shoes…they know everything about walking and running shoes, but nothing about cycling shoes.

After I received a call telling me that my insoles were ready, I drove to the Podiatrist’s office and he 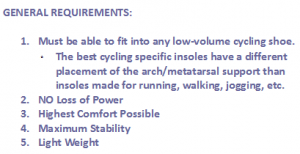 The insoles came back out again and instead of trimming, he started ripping off layers of padding. At this point, the insoles were basically destroyed but, he still tried to get them to fit. Finally, both the insoles and my feet fit into my shoes but, by this time, they were literally destroyed.

As I slid my feet into the shoes, we ran into problem #3. The insoles were made with a polished smooth leather covering much like an insole you would use on an expensive pair of dress shoes. My feet were slipping and sliding around all over the place.

He finally gave up, threw the insoles into the trashcan and said he didn’t know how to make a pair of insoles for cycling shoes. In fact, he didn’t even have any suggestions as to where I could look.

I decided to keep the Shimano insoles. But, now that they are worn out ….

IN SEARCH FOR THE PERFECT INSOLE

In order to offer the best insole for my clients, I needed to spend some time doing what I thought would be an easy Internet search for cycling insoles. It seems that every insole company claims to make a cycling-specific insole, but, looking into this further revealed that most companies only make a general purpose insole that they think can be used for any type of activity, including cycling.

The fact is that cycling shoes are low volume while running/jogging/walking shoes are just the opposite. A 1-size-fits-all just won’t work for low-volume shoes.

My initial list included over 100 insoles that I quickly downsized to 50. I made out a list of 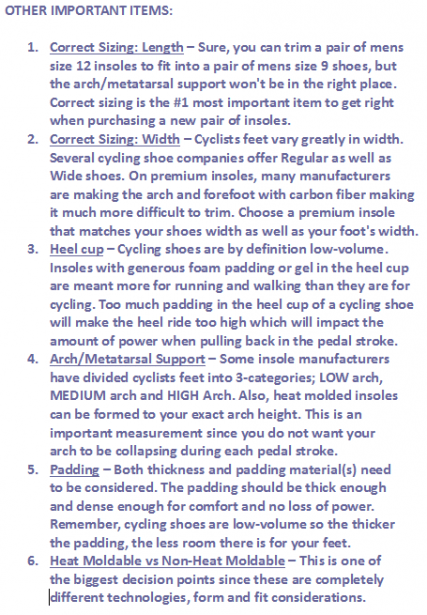 requirements and was able to reduce the 50 to 15. Contacting and discussing my specific requirements with these 15 companies, I was either able to move forward with provided samples or we both agreed that their insole would not work for cycling shoes.
The list was now downsized from 15 to 6, not counting Shimano and g8Performace which have been  tested previously. Each company sent me their solution as promised and every one of them is of the highest quality. All 6 look to be very promising and I am very interested in testing them all out!
Specialized even sent me several samples. Every cyclist I have spoken to that uses Specialized B-G Fit insoles swears by them. These insoles are readily available, and due to their great design and low cost, I included them as “the standard” to see how the others stack up. The only drawback is that I cannot resell these since I’m not an authorized Specialized dealer. So now we are down to 5 out of the box cycling specific insoles using Specialized B-G insoles as the baseline.

As a parallel effort, I invited the salesman from Foot Balance to stop by and give me a demonstration of their insoles and the heat molding process.  These are by far the most custom. A special oven is ‘needed as well as a molding pillow.

The insoles are fed into an oven just like DVD’s into a car stereo while the athlete stands on a soft molding pillow. When heated to around 180°F, the heated insoles are ejected and placed onto the pillow by the fitter.

The athlete is instructed on where to stand and the molding process commences. After 2 minutes, the insoles have cooled enough and take an exact  set to the athletes feet.

The next day, I divided the insoles into two categories, (a) heat moldable, and (b) non-heat moldable.

Here is where it gets interesting.  Continued in PART II

The following companies were very generous in supplying me with these “CYCLING SPECIFIC” insoles.

Note: All insoles were obtained as a sample from their respective company 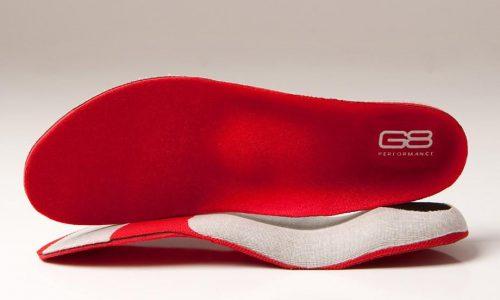 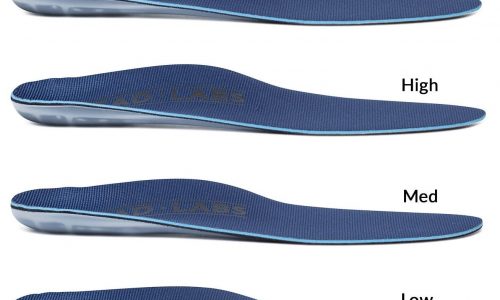