A Full 10 out of 10! Primarily a climbing bike, but is also fast on the flats and descents! Really, one of the best bikes on the market! 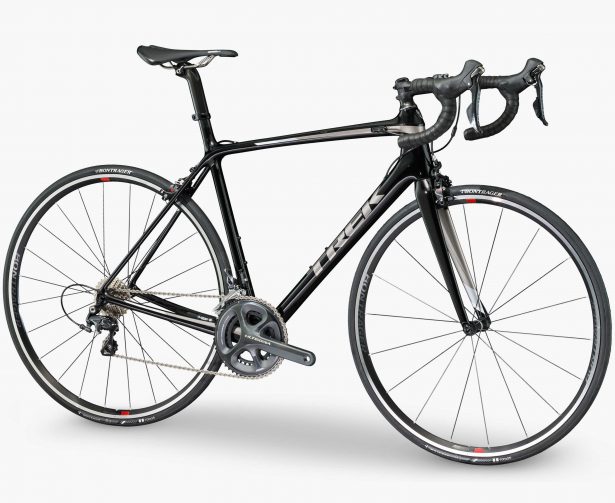 After JAX Bicycles called telling me that I can have a long-term test bike, they asked what size

I need. I took my inseam measurement and calculating via the LeMond method, I ended up with 56.5cm. I went onto Treks website and found out that they have 2x56cm sizing options for Émonda SLR’s, called H1 and H2. The SLR 6 and SLR 9 are offered in H2 while the SPR 8 and SLR 10 are offered in H1 only.

For completeness, all Émonda SL’s and Émonda S’s are H2 fit.

As can be seen by the accompanying table, H1 is meant for Pro Tour riders and assumes that the rider has unlimited flexibility. The stack of an H1 frame is almost 3cm shorter (N in the geometry diagram), while the reach is almost 1cm longer (M in geometry diagram). H2 is for the rest of us.

What exactly is Stack and Reach?

STACK refers to the vertical distance above the bottom bracket, measured from the 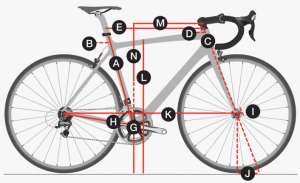 REACH refers to the horizontal distance forward of the bottom bracket measured from the center of the bottom bracket to the center of the top of the head tube. Your inseam impacts stack. Longer legs need a taller bike. Your torso and arms impact the reach. Fine-tuning the overall reach is accomplished by stem length but should NEVER be modified by moving the saddle forward or backward.

In the past 4 years, carbon bikes have come a very long way. The manufacturers have learned a lot and have passed down their knowledge to GREAT handling LIGHTWEIGHT bikes in the 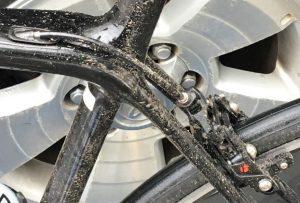 This is true for literally every major manufacturer. For example, in this price range, manufacturers offer high end carbon frames with high end groupsets. In my opinion, the best-bang-for-the-buck is to choose the “lowest-end” bike in the highest category.

A bike like the Trek Émonda SLR 6 which offers the same frame as the other much higher priced SLR’s. The difference being that the SLR 6 has a more moderately priced groupset – Ultegra 6800 mechanical – but still sports several higher priced features such as the lightweight Bontrager Speed Stop direct mount calipers. As parts wear out, replace them with the next level higher model.

Aside: I ran into a problem with the Bontrager Speed Stop calipers. I had no

rear brake! I would pull the brake lever as hard as I could and all I did was coast to a stop. Absolutely zero stopping power from the rear caliper. Since Bontrager manuals are hard to locate, I found the problem when looking through Shimano’s BR-6810 direct mount brakes manual.

The Trek mechanic had cut the housing too short which prevented the calipers from closing enough to grab the rim with enough force to stop the rear wheel from turning. Replacing the housing with one that was 0.5” longer solved the problem. So, the next question you will have is “do they stop as well as a regular set or direct-mount set of Ultegra (BR-6800/BR-6810) or Dura-Ace (BR-9000/BR-9010)?”

Looking at the first photo, it can be clearly seen that the rear brake housing is cut way too short as it’s already stretched to its maximum before even pulling the lever. The second photo shows that when pulling the brake lever, the only place that the housing can go is to dig into the frame. As a safety issue, if your direct mount calipers don’t seem to stop, the housing is probably too short.

Note: JAX mentioned that the Domane far outsells the Émonda and Madone combined!  For clarification and completeness, the Domane is built as an endurance road bike. The Émonda is the climber and the Madone is Trek’s aero road bike.

As mentioned in several of my past articles, the main bicycle deal-breaker for me is a bicycle that handles like a noodle. Everyone has ridden one of those. You press on the pedals and the bottom bracket and rear end sway so much that the rim contacts the brake pads and the bike moves around so much that it feels like the rear tire is going flat. I’ve test ridden my fair share of those and would not recommend them to my worst enemy.

But, believe me, this Trek Émonda is NOT one of those. Quite the contrary, the frame is stiff but not overly stiff, and very compliant. I have put as much power into the pedals as I can and I have experienced absolutely ZERO bottom bracket/rear end flex. This bike goes fast up hills and goes fast on the flats.

The Émonda SLR 6 comes in 4 options, the differences being in paint only. The basic paint is Trek Black (pictured in this review). The other 3 options are Black/Pink/Yellow,

Charcoal/Green, Red/Gray and add $500 to the base price of $5,500. For those that want to go all out on the paint scheme as well as choose different components, just click here and be taken to Trek’s PROJECT ONE bike personalization website.

For the Émonda SLR 6, you can choose from;

HOW DOES THE BIKE HANDLE?

For the past month, we have had many wet days in a row. Not normal for SoCal. In fact, it’s 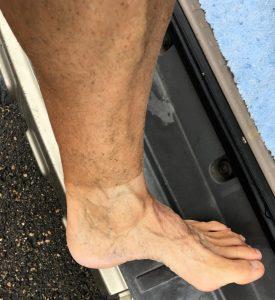 raining right now as I’m editing this review. Since I still need to train, I have tried to get out between the waves of heavy storm cells that pour one minute and partial blue skies the next. Last week we had a storm hit us from the south, the next day a storm from Alaska, the next day another from the south again so it’s been difficult to find a time to ride with minimal rain.

So, putting on the rain gear, I’ve tried to time it so that when the roads are a little wetter, I’ve done flats, when they are a little drier, hills. In fact, if you look at the picture to the left, that’s not a tan, that’s road grime. Yeah, the socks were almost black. But, regardless of the rain, I’ve been able to get in some good testing on the Émonda.

Alternating flats and hills, I really put the Émonda through its paces to see what this bike is capable of. 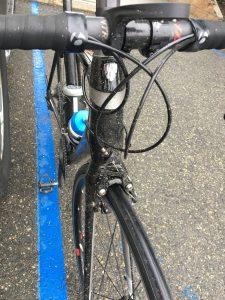 Émonda feels smaller than it is making it a great handling crit bike. All 3 of these bikes are listed as 56cm. The BH feels more like a 57/58cm, the Cervelo R5 feels like a true 56cm and the Émonda feels like a 54cm. Is that a bad thing? No because it feels like it was custom built for me. It is a very comfortable and very fast…especially uphill.

CLIMBING: We have a local climbing route through the hills of San Clemente. Most people think “San Clemente, a beach community, got to be flat.” Not the case. Lots of steep hills, usually around 1.25 miles and most don’t go below 13%.

This bike SCREAMS up the hills. With the Émonda, I can click one gear smaller on the cassette than I can with most other bikes. While doing interval hill repeats, I’ve seen my power meter spike to 1,000 watts.

This bike takes all that power and deposits it directly to the rear wheel.
No bottom bracket flex, no rear end flex, no wasted energy. One thing I would consider to make this bike even faster up hills is an upgrade in wheels. The wheelset that comes with the Émonda SLR 6 is a Bontrager Paradigm Comp TLR – MSRP PAIR = $600.

DOWNHILL: On one of our hill days, a friend came with a new semi-custom Italian bike. 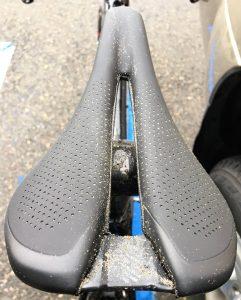 Beautiful bike, beautiful paint but he could barely control it going downhill. At around 30 miles per hour, the front end started to shimmy. It got a lot worse as the speed increased.

On several of our descents, we hit close to 50 miles per hour coasting. For these hills, he was dragging his brakes the whole way. I felt nothing like that on the Émonda. NO shimmy at all. In fact, the bike felt smoother the faster we descended. Even at speeds of 50 miles per hour, the Émonda is perfectly stable.

FLATS/ROLLIES: Even though the Émonda has a very oval downtube, Trek varies the oval shape at different parts of the downtube. At the bottom bracket, the downtube is a flat-oval which maximizes stiffness. Near the steer tube, the leading-edge of the downtube is more of a semi-circle shape which aids in aerodynamics.

This vary-shaped downtube represents the best of both worlds since the result is a bicycle that is stiff yet aerodynamic. This combination really helps you to go fast. You can really feel this working on the flats and rollies since this bike does not bend nor flex.

When we test bikes, we ride them hard. We hammer on them in the hills and on the flats. We ride them in the rain and hose them off when done. We don’t want to baby them but instead, do real world testing.

If you are in the market for a new bike, consider the Émonda SLR line of bikes. Remember, it’s the same frame throughout the SLR lineup and yes, it’s really that good!

You don’t like Ultegra or 14.5 pounds is too heavy? Then choose the 13.9 pound SLR 8 Race Shop Limited with Dura-Ace 9000 groupset…same bike the pro team rides. Or maybe an 11 pound SLR 10? Lots of options and they are all built on the same frame and in the USA.

Or, if you want to do any modifications with the SLR 6, you can always use PROJECT ONE to modify the drivetrain, components or accessories. By using PROJECT ONE, I could easily shave off at least another 1 pound with lighter wheels, lighter stem, lighter tires and lighter saddle. Or, I could continue to enjoy this 14.5-pound bike, and, for $5,500, this is still a fantastic deal!

Would I buy one? Yes, definitely! 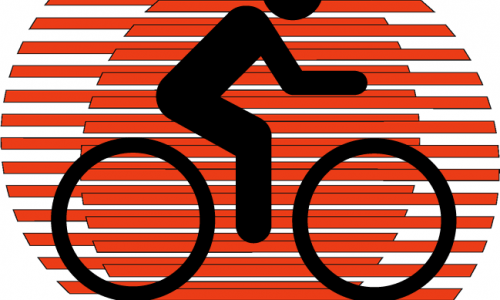 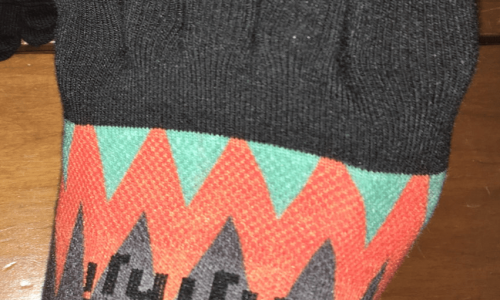